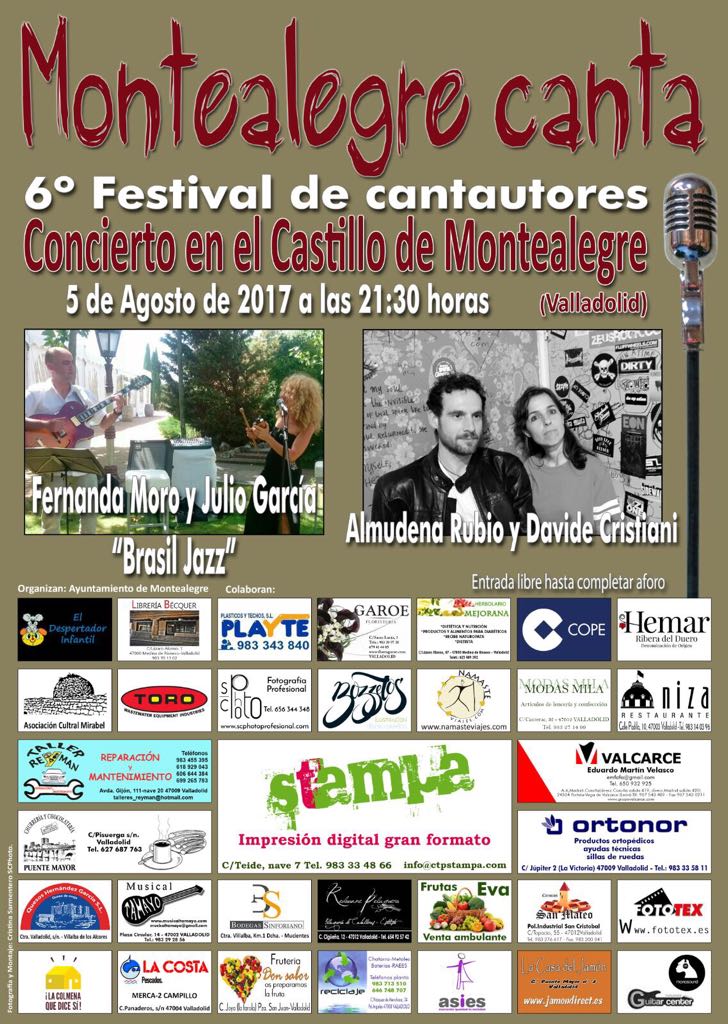 Toro Equipment is one of the sponsors of VI edition of “Festival de Cantautores” which is putting on at Montealegre de Campos Castle (Valladolid) the 5th of August. On this occasion, this festival is going to be represented by two groups with different influences but with the same folk spirit that have surrounded this festival for years.

On the one hand, Fernanda Moro and Julio García play songs from South-American music, specially, Brazilian music -bossa nova and samba-, from jazz perspective. In their repertoire we can find some Antônio Carlos Jobim classics like “Eu sei que vou te amar”, “Desafinado” or “Garota de Ipanema” and others like “Influencia do jazz” by Carlos Lyra.

On the other, the duo formed by Almudena Rubio and Davide Cristiani plays, principally, spanish protest songs. In their repertoire there are a lot of songs by Chicho Sánchez Ferlosio, but we also can find musicalized poetrys like “Negra sombra” by Rosalia de Castro, habaneras like “Veinte años” by María Teresa Vera or South-American folk music like “Las simples cosas” by argentinian musicians César Isella and Armando Tejada or “Zumba que zumba” by Soledad Bravo from Venezuela.

The festival is going to take place on the 5th of August at 21:30 in Montealegre’s Castle (Valladolid) and the entry is free up to completing the capacity.

Previous Post
Toro Equipment is going to be in Aquatech Mexico 2017
Next Post
Video: W-Tank® Applications in Sludge Management