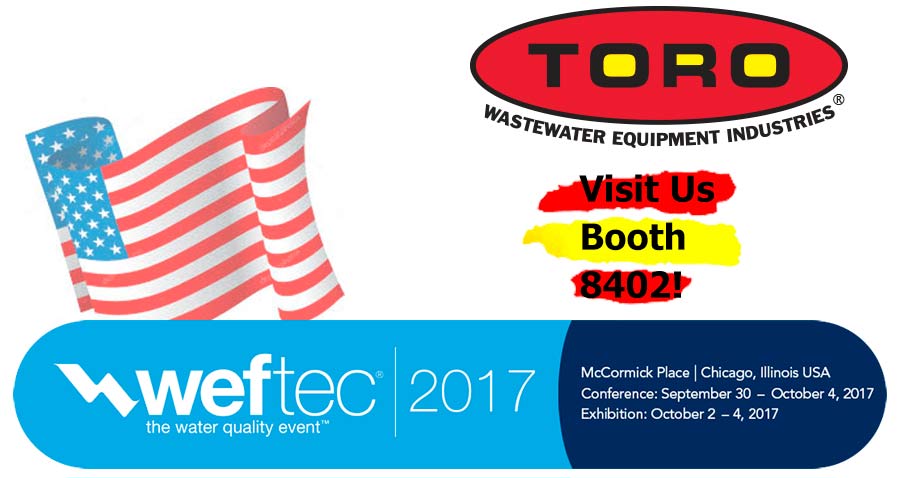 This Weftec ninetieth edition takes place in McCormick Place at Chicago, Illinois from the 2nd to the 4th October and you will be able to find us in booth 8402

One more year, and this is the fourth in a raw, Toro Equipment takes part as exhibitor in Weftec. This international adventure that began in 2009 with the edition celebrated in Orlando, Florida, adds the sixth episode in which the Spanish company goes to United States to take part in the major fair on water quality around the world.

After the success in Aquatech Mexico during September, Toro Equipment goes again to American territory to continue our international expansion. On this occasion, we travel to Chicago to show last novelties in water treatment and to take part in the most important sector fair at United States.

Some of these novelties are the new volumes of W-Tank® Digesters, Settling & Storage Tanks made in composite modular bolted plates and FRL Anaconda® Dissolved Air Flotation System for high flows -to 600 m³/h- which has been awarded with Higher Technical Novelty by SMAGUA 2017 in Zaragoza’s fair.

The event is organized by Water Environment Federation and it has held in New Orleans and Chicago alternatively since 2012. It gathers around a thousand companies from all over the world in a place about 28,000 m2.

Actually, Toro Equipment is one of the most important companies specialized in design and manufacture of equipment to treat water. It is present in more than 60 countries around the world and aproximately the 70% of the invoicing comes from international markets. The presence in some of the most important fairs of the sector –Pollutech, IFAT, Weftec, Aquatech– have promoted a great international development.

Pre-assembled solutions and equipment versatility and adaptability make Toro Equipment one of the leading companies in supply of wastewater treatment equipment.